NHERI@UTexas equipment resources were primarily established with funding from the National Science Foundation (NSF) under the original George E. Brown, Jr. Network for Earthquake Engineering Simulation (NEES) program. These equipment resources have served the earthquake engineering community for over 10 years under the name of NEES@UTexas. All equipment operated by NEES@UTexas is now part of NHERI@UTexas. This equipment includes: (1) five, large, hydraulically-controlled shakers that can be used as mobile, wide-band dynamic sources for excitation of geotechnical and structural systems, (2) a tractor-trailer rig used to transport the four largest shakers, (3) a field supply truck for refueling and field maintenance of the mobile shakers, (4) an instrumentation van that houses state-of-the-art data acquisition systems and electrical power generation capabilities, (5) a field instrumentation trailer that has air-conditioned work space and electrical power generation capabilities, and (6) an extensive collection of field instrumentation, DAC systems and a wide range of numerous sensors that are used to measure vibrational motions and pore water pressures.

The five mobile shakers offer a wide range in force and frequency generation capabilities. For ease in identifying and referring to the shakers, they have been given the following names: (1) T-Rex, (2) Liquidator, (3) Raptor, (4) Rattler, and (5) Thumper (see photographs in Fig. 1). The two heaviest shakers are T-Rex (29,000 kg) and Liquidator (32,800 kg).

Figure 1. Photographs of the five mobile shakers and tractor-trailer rig.

T-Rex (Fig. 1a) is capable of generating large dynamic forces in any of three directions (vertical, horizontal in-line, and horizontal cross-line). To change from one shaking direction to another, the operator simply pushes a button in the driver’s cab. The shaking system is housed on an off-road, all-wheel-drive vehicle. The theoretical force outputs of T-Rex in the vertical and both horizontal directions are shown in Fig. 2a and 2b, respectively. The maximum force output is about 267 kN in the vertical mode and about 134 kN in each horizontal mode. In addition to the significant, 3D load-generation capabilities of T-Rex, this machine also has the capability of pushing cone penetrometers and other custom-made vibration and/or pressure-sensing instrumentation into the ground using a hydraulic ram located at the rear of the vehicle. These overall capabilities make T-Rex unique in the world.

The second large shaker is Liquidator (Fig. 1b). Liquidator is a custom-built, shaker that was designed specifically for low-frequency, large-motion operation. There is no other shaker like Liquidator in the world. It can be changed from the vertical mode to the cross-line horizontal (shear) mode at the manufacturer’s facilities (IVI in Tulsa, OK) in about two working days. The theoretical force outputs of Liquidator are shown in Fig. 2. The maximum force output in both modes is about 89 kN down to a frequency of 1.3 Hz. However, we have recently developed a new Liquidator testing configuration that allows the entire off-road mobile platform to be lifted off the ground and oscillated in the vertical mode at frequencies between approximately 0.3 - 1.0 Hz. This modified configuration allows Liquidator to generate peak dynamic forces up to 89 kN down to 0.7 Hz. Below 0.7 Hz, the force level decreases but is still substantial to about 0.3 Hz. This modification is a remarkable and completely unique capability that has significant implications for deep (1 km or more), active-source subsurface imaging. Like T-Rex, Liquidator is also mounted on an off-road vehicle and has a penetrometer/instrumentation pushing capability mounted on the rear of the vehicle.

The two, intermediate-level shakers, based on force-generation characteristics and vehicle weight, are Raptor and Rattler. Raptor is a 1982 International Paystar model Y-1100 vertical shaker (Fig. 1c). This type of shaker is called a compression-wave (P-wave) shaker in the geophysical exploration community. The theoretical performance of Raptor is shown in Fig. 2a. The maximum vertical force output is about 120 kN. Raptor is ideal for situations where the force output of Thumper (discussed below) is not sufficient for the desired testing application and the 3-mode shaking capabilities and/or higher force output of T-Rex is not required. The other intermediate-level shaker is Rattler (Fig. 1d). Rattler is a horizontal (shear-wave) vibrator that is a 1980 Mertz Model 13-609 mounted on an off-road vehicle. The theoretical performance of Rattler is shown in Fig. 2b. It has a frequency-force response which is nearly identical to T-Rex in the shear mode. One benefit of having two shear-wave vibrators (T-Rex and Rattler) is that they can be parked side-by-side with their force outputs synchronized to be in phase so that a larger area of high shear strains can be created. Thus, an instrumented portion of soil beneath the two shakers can be excited in a condition closer to plane-strain for in-situ liquefaction and nonlinear soil testing. A similar arrangement can be created in the vertical shaking mode with T-Rex and Raptor. In addition, T-Rex and Rattler can be located next to each other but positioned to permit 2D, horizontal shaking of the ground surface. T-Rex, Liquidator, and Rattler must be transported to and from test sites on the 26-wheel, tractor-trailer rig shown in Fig. 1f. The large size of the tractor-trailer rig, called the Big Rig, is required because both T-Rex and Liquidator create “over-load” situations. Also, due to regulations in some states, Raptor has to be transported with the tractor-trailer rig.

Thumper is the smallest shaker and is built on an International model 4300 truck. Thumper has a moderate force output, which makes it ideal for testing in urban areas. A photograph of Thumper is presented in Fig. 1e, and its theoretical vertical and horizontal frequency-force outputs are shown in Fig. 2. The maximum force output of Thumper is about 27 kN. The direction of shaking with this machine can be changed from vertical to horizontal in about two hours at the test site. T-Rex, Liquidator, and Thumper are also equipped with hydraulic take-off connections that permit each truck to power other hydraulic equipment in the field. For example, T-Rex or Liquidator could be used to power linear hydraulic actuators for in-situ, push-apart, structural testing of piles and drilled piers. Furthermore, the hydraulic shakers mounted on T-Rex, Liquidator, and Thumper can also be removed and attached on a structure. The shakers can then be powered at some stand-off distance by the hydraulic take-off and electronics from the associated mobile platform/truck. 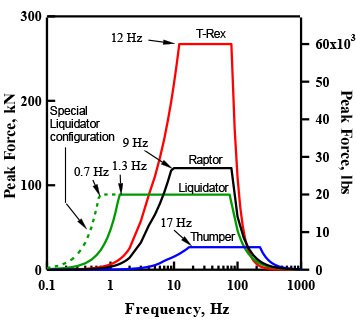 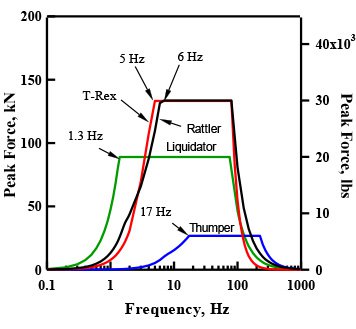 A significant amount of field instrumentation is also part of the NHERI@UTexas equipment facility. This instrumentation includes: (1) two main data acquisition systems (discussed below), (2) 85, 1-Hz vertical geophones (Fig. 3c), (3) 24, 1-Hz horizontal geophones, (4) 6, high-capacity dynamic load cells, (5) 18, triaxial MEMS accelerometers, (6) cone penetrometer test (CPT) and seismic CPT equipment, and (7) 12, 120-seconds Trillium Compact broadband seismometers (see Fig. 3f). The CPT equipment was manufactured by Fugro, Inc. There are four electrical cones, with two of them having a base area of 10 cm2 and the other cones having base areas of 5 cm2 and 15 cm2. A photograph of the CPT equipment in use on the back of T-Rex is presented in Fig. 3d.

The two main data acquisition systems are: (1) a 64-channel Data Physics spectrum analyzer system, and (2) 10, 3-channel Nanometrics Taurus digitizers (30 total channels). The Data Physics system uses a Microsoft Windows-based software named SignalCal 730 that generates input signals (sinusoidal, stepped-sine, white noise, frequency sweeps, etc.) to drive the mobile shakers and record output signals from various sensors. The Data Physics system actually consists of three dynamic signal analyzers, which can be used individually as two, 16- channel units and one, 32-channel unit, or can be linked together as a single 64-channel system. Fig. 3e shows the setup of the Data Physics Analyzers as 3 separate units with different sampling rates during an in-situ liquefaction test. All sensors are connected to the Data Physics spectrum analyzers by electrical cables. These analyzers have the capacity to record data for long periods of time (hours) at a high sampling rate (up to 200,000 samples per second). Furthermore, the control software, provided by Data Physics Inc., can be used to perform real-time frequency domain calculations and display auto power spectra, transfer functions, coherency and phase plots for reviewing and analyzing data in the field.

It is not practical for field experiments that utilize widely spread sensors (hundreds of meters to a km apart) to have all sensors connected with electrical cables. Passive surface wave testing and topographic amplification studies represent such experiments that will likely be conducted by researchers using the NHERI@UTexas facilities. In these cases, the Nanometrics Taurus digitizers and Trillium seismometers can be used. The 10, solar-powered Taurus digitizers are self-sustaining recording stations, each with three recording channels. They are designed for long-term deployments such as aftershock monitoring, but can also be used for any type of data acquisition where individual, GPS-synchronized digitizers are required. Although the Nanometrics Taurus digitizers are predominantly used with the Trillium Compact broadband seismometers, other types of sensors can also be connected to the system to monitor strain or displacements of buildings and bridges. Fig. 3f shows a photograph of the Trillium Compact seismometers and Taurus digitizers during a huddle-type calibration test.